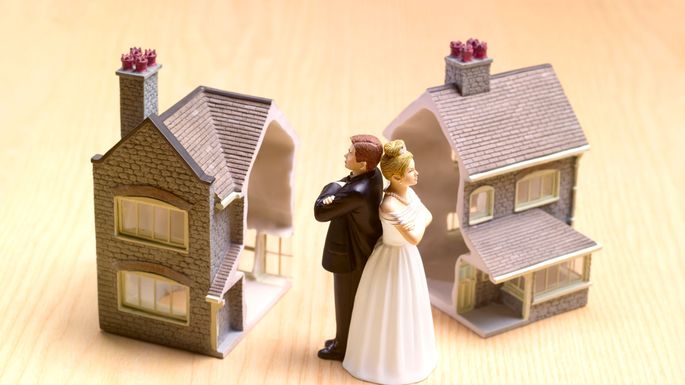 Dividing your assets in a divorce settlement is tough, and there’s no way to split a co-owned house in two. While selling and splitting the proceeds may be the fairest option, if you or your kids have an emotional attachment to the family home, you may be searching for alternatives – at least in the immediate aftermath of the divorce.

“Selling your place is probably the most public display of your divorce,” says Boris Sharapan Fabrikant, a licensed associate real estate broker with Compass Real Estate in New York. The For Sale sign in front of your house will publicly air a part of the divorce negotiations you would rather not discuss with neighbors and friends who may not know about the proceedings.

Some divorcing couples avoid the issue entirely by having one spouse remain in the property, either due to emotional attachment or to ease the transition for the kids.

When One Spouse Keeps the House

What’s the best way to ensure a smooth parting without having to deal with future real estate ownership or mortgage issues? When you’re trying to keep one spouse in the home, there are typically two main factors that will drive your decision-making.

The affordability issue. A house that made financial sense to you as a couple will often have trouble translating to a single income after a divorce. “Often a simple analysis like (monthly cost) gets overlooked,” explains Lili Vasileff, a fee-only certified financial planner in Greenwich, Connecticut, and author of “Money & Divorce: The Essential Roadmap to Mastering Financial Decisions.”

Vasileff recalls working with a woman in the midst of divorce negotiations who was adamant about keeping the house. However, when Vasileff broke down the monthly expenses for the house compared to the maximum possible support payments the client would receive, it was clear there was no way she could afford the property.

For six months, the woman had worked with her attorney to win the house in negotiations, only to opt to sell it and split the proceeds. While it was a move the client came to terms with, Vasileff says the client wished she had realized the impossibility of it earlier on.

The deed issue. To simplify the divorce process, you may choose to refinance your mortgage to remove your spouse from the financial burden while leaving both your names on the deed to cut down on paperwork. But when you decide you want to sell, you may have an uncooperative co-owner on your hands.

Unless a divorce agreement explicitly outlines shared ownership and responsibility of property – not to mention the profit from a sale – it’s best to go through the steps to remove the spouse who moves from the deed. It’s also in the parting spouse’s best interest to cut ties to avoid potential financial or legal liability should his or her ex have problems with payments on the house and face foreclosure.

To avoid major real estate regrets or unnecessary financial hardship after your divorce is finalized, Vasileff notes that you need a thorough divorce agreement with strong language. Consider these five options – you may find one is the best path forward for your situation.

While it’s possible to reach this decision amicably, Sharapan Fabrikant notes he’s typically contacted later in the divorce process, following the decision of a judge or mediator. “It’s not the husband and wife deciding mutually that they’re going to sell it – it’s a court order,” he says.

Fiery tempers in the midst of the divorce can make listing the house tough, especially when both parties want their preferred real estate agent to list the property, “which I tend not to recommend,” says Sharapan Fabrikant, who is also a member of the National Association of Divorce Professionals, a network of professionals that often take part in divorce proceedings.

Buy out the other person. Offloading your house isn’t always the easiest decision. “Primarily when there’s kids, one will keep the home just for the sake of the transition for the children,” Sharapan Fabrikant says.

A way many divorcing couples keep one spouse in the home is having them buy out the other. This typically requires an appraisal of the property to determine its current market value and is typically paid in cash. With this payment, the deed will be transferred to sole ownership of the paying spouse.

If buying out your spouse is your preferred option, be sure you have enough money to do so, on top of other legal fees and costs associated with the split. The average reported cost of a divorce is $15,500, the majority of which is attorney’s fees and doesn’t include real estate, according to a 2014 survey of visitors to the legal advice site Nolo.com.

Sign over your half of the house. If divorce proceedings lead to the agreement that one spouse can keep the house without having to pay his or her ex, be sure all ownership documents get signed at the same time because there’s no guarantee a split will remain amicable.

Try nesting. Also referred to as birdnesting, nesting is an option for divorcing couples with children to minimize the impact on the kids’ lives. The couple continues to co-own the house, where the kids will reside full time, while also having a secondary place to live. Instead of the kids moving between parents’ new homes, the parents will switch off who stays in the house with the kids each week.

Vasileff says she sees nesting as a part of the divorce agreement most often when a family therapist is already involved and making recommendations for the children’s well-being. But now both parents will find themselves financially burdened by the costs of the family home and their individual living situation.

Plus, that amicability might not last long. Rules about who’s in the house when, babysitters, new significant others and even food in the fridge can turn the idea sour. “I’ve had people argue over who ate the leftovers from the week before,” Vasileff says. “Nesting usually doesn’t last very long,” she explains, with both parties opting for a different solution after a year or so either once the kids are more comfortable with the divorce or the parents can’t feasibly accommodate the arrangement anymore.

Set up a time to sell in the future. You still have the opportunity to ease the transition of divorce without creating a long-term financial burden. Whether you choose to wait until your youngest child finishes elementary school or you’re hoping the local housing market heats up, your divorce settlement can determine a time in the future when the house will be sold and the profit split between both parties.

By establishing a set time the property will go on the market a year or more in advance, you allow for “a little bit of a breather” for emotions to cool and prepare for the sale without having to rush, Vasileff says.

Of course, it could also leave room for amicability to fall by the wayside. Like with a sale during divorce proceedings, Sharapan Fabrikant says he encounters situations where he’s working with one spouse who wants to be involved in the sale and the other spouse’s attorney because that party has less interest in the matter.

Can your Individual Retirement Account (IRA) owned before marriage be classified as marital property in a divorce?